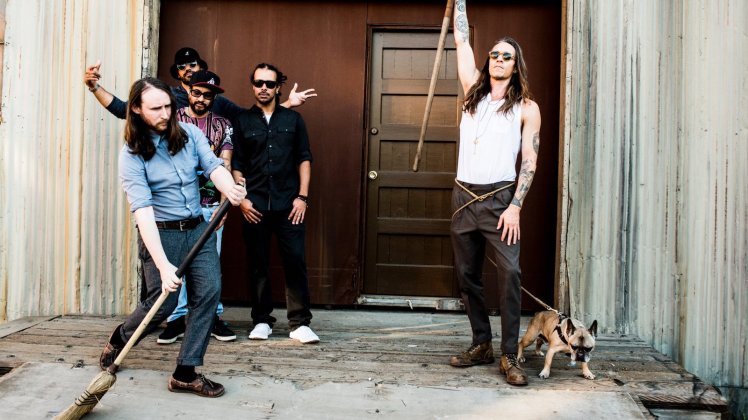 Being a band for 26 years is an eternity in today’s ever evolving music industry. Trends have come and gone, rock isn’t as prevalent as it once was, yet Incubus has managed to endure. The group originally started in 1991, rocking out in their garage in Calabasas, 22 miles north of downtown Los Angeles. Their first full-length Fungus Amongus, which was little more than a compilation of high school demos, was released four years later, but still generated enough interest to afford them a seven-record deal with Sony.

The rest, as they say, is history. Over the next 20 years the band would sell over 13 million albums worldwide, net 14 top 10 singles on Billboard’s Alternative chart and play to sold-out audiences across the globe. Not surprisingly, none of it is something the members themselves ever expected in the first place.

“All of us can’t believe that we’re still able to be making music or have a career that has lasted this long,” guitarist Mike Einziger told Behind the Setlist in a recent phone interview. “Our whole career has been a surprise.”

2017 marks the release of the band’s eighth studio album, fittingly simply labeled 8, yet the longer the band has continued, the more demanding it has become to make new music that lives up to their standards.

“We don’t want to repeat what we’ve already done. We don’t want to do the same thing we’ve done a million times. It’s got to feel exciting in some way,” Einziger said, addressing the six-year gap between their last album. “That’s why things have slowed down, at least in recent years. As we’ve gotten older, it’s gotten more challenging to find inspiration and to find the true motivation to be able to write music together as a band and do it from a place of honesty and sincerity.”

Luckily, things worked out and the spark happened again for Incubus, but the ride was not without a little turbulence. The band made a concentrated effort to not settle for the earliest ideas right off the bat, which led them to work with veteran rock producer Dave Sardy (Marilyn Manson, Oasis) for the first time. This took a specific toll on lead singer Brandon Boyd, who was pressed to push harder than in previous outings.

“That’s difficult for anybody, but everybody in the band had to go through that process. It’s not like Brandon was alone in that,” Einziger explained. “It’s continually challenging, but we’re a band. If you’re making a solo record or whatever, you don’t have to listen to what anybody else says. But in a band, it’s more democratic. The process becomes a little more difficult and a little more time consuming.”

The songs finally snapped into place on the last stage of the process, when electronic producer-DJ Skrillex was brought onboard for a two-week stretch to oversee final edits. Einziger has been friends with Skrillex for several years and the two have worked together on various projects over that period, including a performance with Justin Bieber at last year’s Grammy Awards. The fresh perspective and artistic insight turned out to be exactly what the band needed.

“The further you get into your career, the harder it is to find those moments of energetic, unexpected spontaneity. When Sonny [Skrillex] jumped in, it was really fun and it was really exciting. It brought the whole band together in a way that I’m thankful for,” Einziger said. “But that’s what you get when you work with a great producer.”

In addition to Skrillex, Einziger has spent time on his own in the electronic music world, most notably co-writing Avicii’s unavoidable smash “Wake Me Up” in 2013, but also working with the likes of Zedd, David Guetta, the Internet and rapper Tyler, The Creator. So the chance for him to meld his two musical identities simultaneously on 8 was especially enlivening.

That spirit of collaboration invigorated Incubus to such a degree, Einziger sees it having a lasting impact on future records. “The next time we make an album, the next time we write songs, I can’t predict how it will be, but I know that we want to do it again because it was so interesting this time. We all ended the recording process on such a high note and it was really good for us.”

For fans worried that Skrillex showing up would result in an album full of dubstep and EDM, rest assured the songs are the most aggressive Incubus has written in years. From the propulsive opener “No Fun” and lead single “Nimble Bastard,” the band made a conscious decision to be more upbeat this time around, although not without throwing in a few curveballs along the way. For someone who attended Harvard for both music theory and physics, and has worked on film scores with noted composer Hans Zimmer, Einziger wouldn’t have it any other way.

However, the release of 8 sees the band returning to a modern music landscape it doesn’t quite fit into anymore. The group tried switching things up their last time out, going the EP route on 2015’s Trust Fall (Side A), and the results were decidedly mixed. But the theme of never fitting in is nothing new and has been a near constant over the course of their career. A summer headlining tour with Jimmy Eat World and Judah & the Lion is next on the horizon, and Einziger welcomes the unknown that will follow.

“I feel like I’m in a good place now where we’ve wrapped this chapter up, are about to start a new one, and I’m waiting for everything to get crazy. I know that a lot of interesting things are going to happen over the next year. I’m not quite sure yet what they’re going to be, but I’m excited for whatever they are.”

Originally appeared on Behind the Setlist