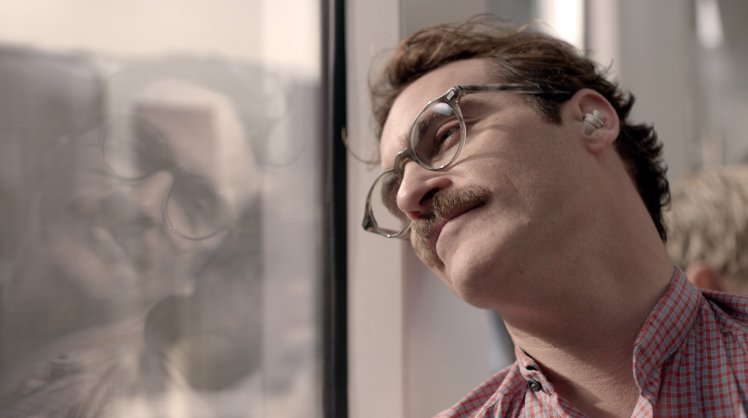 On paper, there’s absolutely no way Her should work as a dramatic film. A man falling in love with his operating system is a ludicrous, Pluto Nash-sized disaster-in-waiting at worst, a mildly entertaining, end-of-the-night SNL sketch at best. Yet, against all odds, the sheer creative genius of Spike Jonze pulls the concept together and makes it work. And boy does it work.

From the world building, to the slightly futuristic meets retro production design, to the dazzling Los Angeles crossed with Shanghai locales, Jonze concocts a time and place where entering into a relationship with a computer is a socially acceptable and normal thing to do, and we the audience don’t question it for a second. That’s a remarkable sleight of hand to achieve, but all would be for naught if the actors didn’t make it believable and tangible on an emotional level.

Joaquin Phoenix was faced with the daunting task of pulling this off by appearing in nearly every scene, often by himself and playing against an unseen voice, which as we know on set was an actress (Samantha Morton) who didn’t even make the final cut. But as Phoenix has proved throughout his career, most recently in 2012’s The Master, he has a deep reserve he can tap into to make any role utterly convincing. The result is one of the most resonant performances of 2013.

It certainly helps when the imaginary voice turns out to be Scarlett Johansson’s, who is as magnetic as the critics have made her out to be. It’s one of the most impressive voice-only performances I’ve ever encountered. The graceful chemistry between her and Phoenix makes Her come to life and give it real world weight, no matter what preconceptions people might have had based on the trailers.

Now, Jonze has been criticized for trying to cram a little bit of everything into Her, and it’s true the film is stuffed to the brim with tantalizing thematic possibilities and doesn’t have time to sufficiently address all of them. The nature of love, what constitutes being in a real relationship, the role of technology in our lives and how it reflects our deeper selves, is all heady stuff not easily explained away by a single montage. Audience’s reactions to the film’s conclusion have been somewhat split as well, but I thought it was earned and a worthy bow on what Jonze was trying to say.

Above all, what Jonze does is zero in on one particular man’s loneliness and struggle to overcome his recent divorce. We experience his alienation and longing for connection firsthand, we ache during flashbacks to his ex-wife, we revel in his bubbling infatuation with Johansson, and we emphasize when (shocker!) all his relationships turn out to be hard work, even one with an operating system.

In much the same way as Eternal Sunshine of the Spotless Mind, there are bits and pieces we all joyfully and painfully see in ourselves over the course of Phoenix’s journey, in addition to being wowed by the inventive flourishes. Years from now Her seems destined to join with it as a modern classic, a rumination of love, loss and ultimately rebirth for the 21st century.