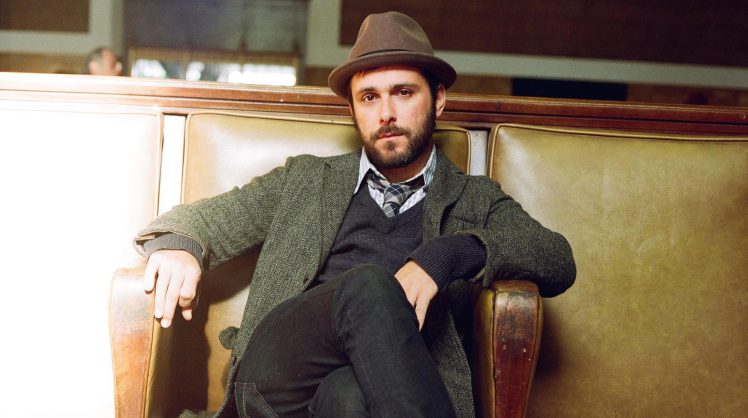 The cover image of singer-songwriter Greg Laswell’s new record, Take a Bow, is a deceptively simple one – a tattered table stands against a weathered wall, the paint having peeled with age. In some ways, fittingly, the table represents the journey Laswell has been on the last several years.

“It tells the story of a lot of things that have occurred, and it’s still standing,” he explains. “Across my life, I feel like I’ve been through it, and I’m still standing. I’m actually better for it. This album in some ways is a pat on the back, a ‘hey buddy, you made it’ type thing.”

Laswell went through a messy, out-of-left-field divorce five years ago, and its influence can still be heard. However, the album, Laswell’s fourth full-length effort, is filled with more highs and lows than he’s previously explored, resulting in his most diverse outing.

“There’s some songs on here that are really happy, and one of the saddest songs I’ve ever written is also on this record. Then there’s a few songs where I’m angry, which I’ve never done musically,” he describes. “It felt right, and I’m pretty proud of the way it turned out. I think people will be able to turn to my record for more reasons than just when they’re sad or feeling melancholy.”

While he may not always appear it, Laswell considers himself something of a hopeful guy, and the sentiment is as prevalent as any.

“There’s a little bit more tongue-in-cheek about this. The lyrics are a little bit more playful and slightly more sarcastic,” Laswell says. “There’s a song called ‘Goodbye,’ which is basically about saying goodbye to somebody. At first listen, it can probably be construed as a pretty sad song, but the actual message of the song about getting to a place where you can say goodbye can be quite liberating, and kind of frees you up for what’s next. In that way, I think it’s definitely another hopeful record. I don’t think I ever want to get to a place where I’m just writing out of complete despair.”

Take a Bow also contains some of Laswell’s moodiest creations yet, exemplified by standout “Come Clean,” on which the chorus is made up of crashing distorted guitars. He attributes the sound to secluding himself in a cabin in Flagstaff, Ariz., for the better part of six months with just his dog for company.

“The most I’ve ever been alone in my entire life was when this record was being made. I think that played into how a lot of these songs turned out,” he admits. “I think part of it was I didn’t really know what was happening at the time. I never really think objectively when I’m making a record. Then when it’s done I will come back to it for the first time as a whole, and sometimes I’m a little surprised at how it turns out.”

At this stage in his career, Laswell has become something of a well-oiled one-man band, and indeed he plays nearly everything found on his records.

“Creatively, I don’t think I’m supposed to be in a band. I have control issues,” he laughs, adding how he mainly listens to a stream of stand-up comedians and hard rock bands like Tool and Nine Inch Nails.

The life of a singer-songwriter may seem easy at times but, as Laswell has learned, not everything always goes according to plan.

“Writing songs is the easiest part, but everything else can be a lot of work,” he confesses. “It’s the hardest work I’ve ever done, and I’ve done some pretty shitty jobs, but it’s also what I love. You have to love everything about it. Otherwise, you’re in the wrong profession.