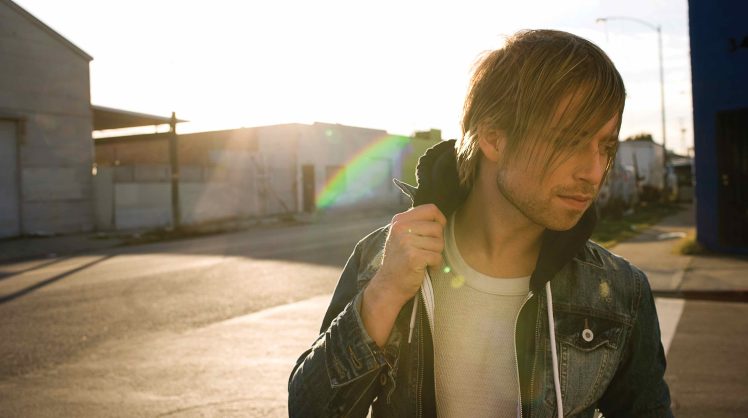 Bryce Avary chats about the making of his fourth album Of Men and Angels, the frustration of long delays, staying optimistic amidst ups and downs, not wanting to forfeit integrity, and the importance of loving the people in our lives.

Let’s talk about this new record you have coming out, which I understand you finished recording last April. What’s that delay been like for you to have to go through?

It was difficult, to be honest, but it makes it that much sweeter that it’s finally here.

One of the things you’ve said about this record was that it was both the easiest and hardest one you’ve done so far. Can you talk about that and what that was like?

Yeah. I think it was easiest in terms of the fact that I was in a very healthy state musically where I was playing really well. I was singing well and I felt like almost a different person than the past couple of records have been. We were just recording songs so much, and it felt like so much creativity was in my court. I kept writing songs, so that was the easy part.

The hard part was… It’s weird because I try to censor it a little bit. It’s been a while. It’s not even something I enjoy talking about so much, why it was hard, but we did this record with some crazy changes with people on our team, I guess you can say. There was a lot of stuff, kind of music business things. There were days where we were like, “Are we a part of making it?”

Especially the way I do it, where I play everything on it. That’s an extreme endeavor, and it takes a lot of blood and sweat, literally sometimes. Some days I would get in my car after being in the studio, and in my head be like, “Am I even making a record right now that’s coming out?” There was some confusion for a second on totally logistical things, but like I said it all worked out. Better late than never, and I’m just super excited about the future.

How long did you spend on this one?

I started the pre-production in January of 2009. I went to California and started the actual recording, I think on February 1st or 2nd, and it was done by the end of March. Then during the waiting process, when I was wondering what was going on with everything, I just kept writing. I ended up recording a couple more songs. I guess that was the good part that came out of that.

Did some of those other songs you did afterwards end up making the record?

Yeah, actually. One of those songs was “The Fight,” which was on the EP, and it’s actually going to be one of the bonus tracks on iTunes. So I guess it’s part of the album in a way, too.

Then another song called “Japanese Exchange Student,” which is kind of quirky. It’s weird because our bass player was with me, I was showing him the record the other day, and it’s kind of this song you would think is really lighthearted and goofy but it’s actually in a way kind of dark [laughs]. It’s funny how if you really listen to the lyrics it’s this sad song, but it’s a really upbeat and ridiculously poppy song. It’s kind of funny. Then there’s another song called “Pull Myself Together” that I put on the record.

To be completely honest, there were over 20-something songs. Even a couple weeks ago, I was like, “We should change this song. We should take this one off and put this other one on.” Stuff like that, which didn’t happen.

When you record so many songs that were meant to be on a record, you’re bound to have a lot that don’t make an album. They’re all actually really good songs still. There were no super obvious b-sides. A lot of time was spent on every one so they would be big songs, so it is crazy to think there are six or seven songs that I’m curious how they’re going to come out now. I’m definitely not going to put them on my next record because I just don’t do that. I’d rather just get everything out.

Yeah, like these are the songs that didn’t make the record, and put it on iTunes one day.

Something else you were saying about this record was that you described it as a turning point about how you kind of had to strip your motives down to the essentials. Can you talk about what that process was like?

These days everybody is co-writing with everybody else and people are having other people write their songs. To the powers that be, it’s really just all about hits and stuff. Don’t get me wrong, I love hits. I’m a hit kind of person, to be totally honest, and I feel like you can probably pick up on that by listening to my songs.

I don’t know. It’s wild. I’m excited to have it come out. I’m so excited, as you can imagine. It’s almost like a weird dream at this point because it’s taken so long for it to come out that it’s this surreal thing. It’s like, oh yeah. This album’s coming out. It’s been the biggest thing in my life for the past year and half, because I wrote most of the songs in 2008. I think it’s going to be really cool when it comes out to see people’s reactions. I think that’s going to really excite me more than I am, because I’m hugely excited. I’m actually already writing and in this sort of new headspace.

Another thing I picked up on is the record seemed to be a little bit less sunny and more about the ups and downs of life. Would you say that’s accurate?

I would say so. It’s just very real. It is about ups and downs. When I put out my first record, Calendar Days, I wrote that when I was a junior in high school. I love those songs and I think they’re great, but I’m a little bit older now [laughs]. I’ve experienced more, and you go through hills and valleys, as the song would say. This record touches on a lot of that, and it’s a pretty spiritually charged album. It’s still very optimistic. It’s a very joyful album. It’s just real.

I think Do You Feel was that way. “Do You Feel,” “Save,” “Run to You” and “So, in This Hour…” Even Hello, Good Friend had tracks like that. I think we’re sort of known for our singles because I have this perception of being this ridiculously happy-go-lucky, super cheery person. I think that comes from the fact that our singles were songs like “So Much Love” and “Brat Pack.”

We were talking about this. We should freak everyone out one day and do a 15-song, 20-song set of fairly heavy Rocket Summer songs, almost dark Rocket Summer songs [laughs]. Sometimes that perception is a bit weird, especially to me. It’s not a bad reputation, I guess, but it’s definitely a bit off from reality. I think this album’s a very real album. It’s still sunny, but it has its darker moments.

The title Of Men and Angels is taken from a line in the song of the same name. How did you come up with that phrasing?

That actually comes from a Bible verse that says if I speak in the tongues of men and angels yet lack love, I’m nothing more than a clanging symbol or resounding gong. It goes on to say that basically nothing matters unless you’re genuinely loving one another. We can be saying all the right things, we can be believing all the right things, but if we’re not loving the people in our lives, it’s really pointless.

It was just something that laid heavy on my heart. The lyrics are: “The tongues of men and angels/I speak but lack love/Oh, love, will I stab you in the back/Working everyday, I’m afraid I forgot to show what’s most important.” I think it’s a bit of a challenge for me, if anything, that whole concept.

I think, especially coming off of Do You Feel, I worked really hard. I am a bit of a workaholic, and those in my life would definitely tell you that, so I just wanted to do it for the right reasons. I went into this album with that whole mindset. What happened afterwards with the waiting period made that even more accentuated and magnified.

One of the things you’re well known for is playing all the instruments and doing all that. Do you ever have any desire to be a part of collaborative band or something along those lines?

I think it would be really cool. I like the idea of actually doing that at a later date. I don’t know about Rocket Summer so much because at this point it’s 10 years in the making and it’s a bit of a well-oiled machine. It isn’t broken, so maybe we shouldn’t try to fix it [laughs].

I would love to do that. I definitely have ideas for that. I think it would be really cool to form some kind of supergroup at some point with some friends and have it be a side thing. We’d do one tour or two tours, or something, and just make one record. But, I’m not there yet.

What would you say your influences are, both past and present?

It’s so hard to answer that question because I have to have more than one iPod just for all the albums I’ve actually purchased. They’re all over the place. I’m equally as moved by Sunny Day Real Estate as I am Ryan Bingham, a country singer-songwriter [laughs]. It’s really difficult. I definitely don’t ascribe to just one thing.

It’d actually be kind of cool one day to make a record showcasing that a little bit because I definitely don’t see myself as just some Warped Tour guy or something, especially as a songwriter. That’s obviously where things have ended up, and we’re more than happy about getting to be a part of that scene, but I like a lot of different types of stuff.

Yes, we are. We’re about to announce all that. We’re still trying to figure some things out.

Will it be as support or as a headliner?

It might be both [laughs]. We’re talking about maybe doing one tour opening and then leading into a headlining tour. It’s kind of weird. We have all these things set up and ready to go, we’re just waiting on a couple things and are finally making some decisions.

Things obviously took a little longer in that situation as well. It’s kind of weird to have an album come out and not be touring immediately, but I guess the good thing about that is when we do tour, everyone will know the songs. It’ll be that much more gratifying for us, I guess.