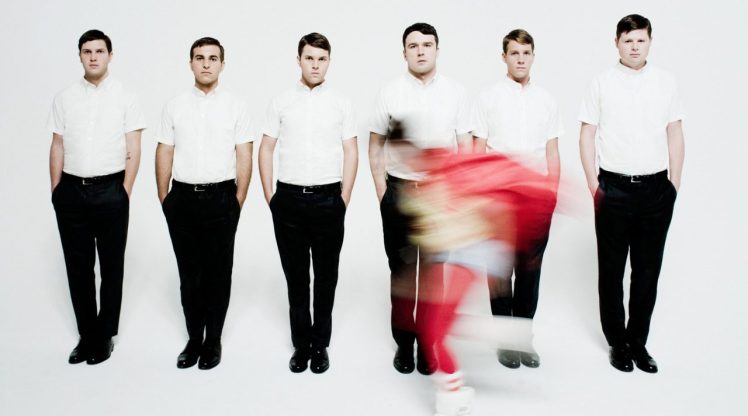 Max Bemis is a storyteller, plain and simple. Utilizing the backdrop of Say Anything, his unique writing style is an autobiographical extension from life’s bumpy road.

“All of our records together are so personal that in a way you can listen to them in sequence and it would be the story of my life, starting when I was 14,” Bemis says. “The early 20s and your teens are such a defining time that by the time you get to my age you should at least have some idea of who you are. 24 to 25, it’s like I know who I am and now I have to face the world.”

Taking a cue from comics, which Bemis is a huge fan of, Say Anything’s self-titled third album projects the theme of a mental superhero, represented by a young boy dressed in costume on the disc’s cover.

“You have to be your own hero and find something beautiful in the world before you can make a difference,” he explains. “It’s about self-empowerment and then finally setting your sights on who the real enemy is.”

Bemis knows all too well that has often been himself, and his past struggles with depression and drug abuse have been well documented. Bemis, though, spent the last few years getting a clean bill of health, falling in love and marrying Eisley’s Sherri DuPree in the process.

“All these things happened during the story on the record – me falling in love, me letting go of the past, all these things – and it leads me to this inner peace,” Bemis says. “I have to let go of all these false ideals and go through all this pain and all this joy to really become so aware of it that I can actually write a song about it.”

“You’ve heard glimmers of hope. This ideal has been held throughout the years of Say Anything,” he goes on. “Even on the darkest times of …Is A Real Boy and In Defense [of the Genre], it’s been there. However, it’s masked. There’s so much pain and so much darkness over it that I never got to write a song about, hey, let’s take a breath.”

With the new record, Bemis jumped at the opportunity to refocus on bigger political and religious issues.

“One thing people really appreciate about Say Anything is the social critique and social commentary. I feel like I am more able to do that again now that I’m not just focused on my problems,” he points out. “I’m able to look around at society and be like, ‘OK, here’s something that I wish we could do something about. Here’s something I identify as an issue or a threat or something I would want to make a change in.’ That’s why it’s a self-titled record. It’s like the parts of me and Say Anything that I think people connect to are now going to be the things that are distilled. I’ve sort of let go of the parts that might be considered gimmicky or negative.”

In addition to Say Anything, Bemis released an album earlier this year with Two Tongues, a side project he started with Saves the Day’s Chris Conley, and also opened an online song shop where fans were able to purchase personalized songs written just for them.

“I could write a million songs but writing a Say Anything record is a little harder,” Bemis admits. “To me, Say Anything becomes something that’s not just me. It’s Coby and it’s Alex, and it stands for certain political and spiritual things. That’s why there’s not a million Say Anything records, but there’s tons of Max Bemis written songs.”

“I’m not saying that they’re the best songs in the world or that I’m that good at it,” he continues. “It’s just to actually pump them out, I’ve discovered some kind of mathematical thing about it where I could literally just sit in a room and write songs all day and never stop. Writer’s block comes and goes, it’s not like I haven’t experienced that, but it’s mostly related to Say Anything because there’s such a specific purpose to it. Not any song can become a Say Anything song.”

Now that his early midlife crisis has passed, Bemis is determined to continue documenting via guitar be it happy or sad, knowing clear skies in his story are far from a surefire guarantee.

“I have this amazing wife and I have this amazing life, so what comes after this Say Anything record?” Bemis wonders. “Although it’s chronicled that I’ve developed to become this new person and have these great things to hold on to, this self-love or connection to something bigger or this amazing love of my life that I have, it doesn’t end there. You know what I mean? The human struggle is until the day you die.”