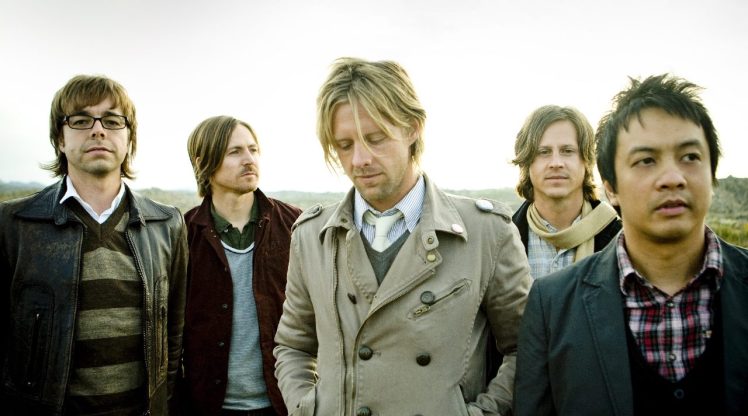 Switchfoot started out with 80 or so rough song ideas for their new album, Hello Hurricane, which might seem a little daunting at first. The tough part wasn’t coming up with them, though. It was whittling them down to the best ones.

“I tend to view songwriting as kind of like a diary of sorts, so to write a song a day is not that big of a deal for our style,” frontman Jon Foreman explains. “The trickiest part is determining which of those diary entries are worth spending a few days of your life on and sinking your time and energy into. The whole process of making this record really allowed us to come to terms with who we are as a band, who we are as people and what type of music we want to make.”

The band members, who include Jon’s brother Tim on bass, Chad Butler on drums, Jerome Fontamillas on keyboards/guitar and Drew Shirley on guitar, asked themselves why they were even playing music in the first place. In the end, they decided the songs had to strike them to the core and reverberate something meaningful to make the cut.

“We came up with the idea that the song had to have a piece of you within it,” Foreman says. “I think it was Dolly Parton who said, ‘If you ain’t crying, why you singin’ it?’ That was kind of the benchmark for which songs we decided would make the record.”

In fact, the San Diego natives like Hello Hurricane so much they are doing something they’ve never done before in their 13-year career: play the entire record live from front to back.

“We spent so much time on this record, even down to the sequence of what order the songs are in, that we felt like it was a real incredible opportunity to hand deliver the album to people who would come to see us night after night,” Foreman says. “At this point in our career we’re looking toward things that are going to challenge us, and we felt like that was a good challenge.”

Meanwhile, Foreman wrote Hello Hurricane about finding hope amidst life’s storms and obstacles, which with the way the world is at present makes it as relevant as ever.

“With this past election, you saw hope plastered everywhere. Whether or not you find Obama to be a thought of hope, it’s easy to have that billboard mentality and not really know what hope means,” Foreman says. “For me, hope is an anchor of sorts. It is not something that you can put in your pocket and say, ‘I possess this,’ because the moment you already have it you can’t call it hope anymore. It’s almost as though hope is a yearning and a belief in a world that does not exist yet. Against all odds, this is what you’re pulling towards.

“That, for me, is something I feel like I’ve found the past few years while we were making the record. We didn’t actually know what the record was going to look like, but we knew that we had to push ourselves further to get there.”

Aided by the release of his solo EPs project, Foreman rediscovered what having hope is all about.

“I think for a few years there I was a little afraid to sing about hope or faith simply because I was going through some times personally that created a little bit of a darker sentiment,” he confesses. “For me to be able to sing these songs again feels really great.”

Now for their latest tour, Switchfoot are once again teaming up with a worthy cause, continuing the work they have done recently with organizations such as Habitat for Humanity and To Write Love on Her Arms.

“This tour we’re collecting canned goods for the local food banks,” Foreman explains. “From my perspective, these are towns that have given us so many incredible memories over the years, so to be able to give back in even a small way is a really incredible opportunity for us.”

“It’s all too easy to sing a song about justice and not be involved with justice when the wheels hit the road,” he adds. “I feel like with this record, and with the last few records, just singing songs about hope and truth, and light and beauty, and to not actually be involved around the world would be inauthentic. These are the things that we care deeply about. It feels like we’re already singing about them, so we need to integrate them as far as the actual involvement of everyone.”

It’s only fitting, then, that the band’s motto sums it up so perfectly: Life is short. Live it well.