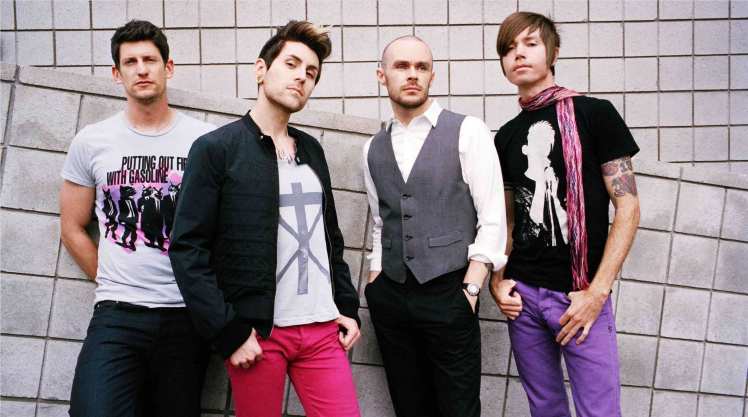 Bassist Hunter Burgan discusses the making of the band’s eighth studio album Crash Love, how it fits into the AFI discography, and how the punk scene has changed over the years.

So album number eight is coming out pretty soon. That must be a pretty good feeling.

Yeah. I feel like it’s probably our most solid record that we’ve done, so we’re really excited to get it out, definitely. We spent the last two years working on it, so it’s like all the anticipation.

When did you first start the process of working on it?

We started at the end of 2007. We wrote more last year when we were in the studio.

So what led you to title it Crash Love?

We sort of brainstormed and thought that title not only captured some of the themes that Davey was writing about, but also embodies the feeling of the music that we had worked on. It was a good marriage between the two.

Talk about the artwork for a little bit, because at least the cover we’ve seen seems to be a little bit of a departure for you guys.

Our last couple records have had similar dark, monochromatic things, so it’s similar like that. But, once again, it’s something that we feel fits the music and themes we were talking about within the AFI universe.

Can you elaborate on any of those themes?

I would love to, but I’m really not the best person to. I just read the lyrics and would sort of butcher it. I can say it does feel a lot like the death of culture.

The first single is “Medicate,” which is a pretty rocking tune. How did it come about and then what led you to pick it as the lead single?

That was definitely one of the more easier songs to put together. While we were writing it, it was one of the songs that felt really natural. As far as picking it as a single, honestly, I have no idea who picked it as a single. We kind of leave that up to the people who actually do that for a living, just because we love all the songs and would be happy with any of them being singles. If there’s some rhyme or reason why one is picked over another, than that’s probably that person’s job who’s picking it to figure out why. I’m really happy because it’s a really fun, active song.

How does it stack up against the rest of the album, stylistically wise?

It’s not the fastest song on there, and it’s certainly not the slowest. There are maybe a couple songs that are in the same neighborhood, as far as driving rock songs go. It certainly is guitar riff oriented, and we have a couple like that. It’s a pretty decent expectation of what’s on the record, but we pull a lot of tricks out of our hat.

Is there still a lot of electronic stuff on this one?

I want to say that the electronics you hear in “Medicate” are about the only electronics on the album. It’s pretty heavy on guitars.

I really like the guitar solo at the end of “Medicate.” Are there more of those on the album?

In your opinion, what are the key tracks that stand out the most for you on the album?

Oh, man. Like I said before, I love all the songs, so it’s hard to pick favorites. I’m pretty fond of “End Transmission.” That’s always one of my favorites. “I Am Trying Very Hard to Be Here” is another good one. “Darling, I Want to Destroy You.” I don’t know. Really, I love them all.

Since you were working on this for so long, did you end up with a lot of extra material left over?

We’re pretty good about getting rid of songs as soon as we realize they’re not going to pan out, so we only went into the studio with maybe an additional two or three songs. Then we only finished tracking one of them. Once we get rolling, we always take our time and realize we have far less time than we thought we had and we better finish these album tracks. We have some demos and songs that fell off along the way, which will be bonus tracks and whatnot.

Originally, you were going to work with producer David Bottrill, but then you ended up going with some different guys. What happened with that?

It’s always strange when you work with a new producer. We’d been working with Jerry Finn on the last two records, and he was such a great guy. After we lost him, we had to find somebody new. With David, once we got in the room, it just wasn’t clicking.

How do you think Joe McGrath and Jacknife Lee, the two guys you ended up going with, influenced the record?

Well, Joe was a really great choice because he worked on our last two records. So more than anyone else, he knows what we want to sound like. He knows the sounds we’re into. He really helped us to basically sound exactly like we wanted to sound. Joe’s definitely a very rock guy and he loves the classics, so he helped us in that respect find the sound and what we needed to create a rock record, which I don’t think we’ve really done in the past.

Jacknife was great because he’d come out of left field with different sounds and ideas. We’d never worked with somebody who’s a bundle of raw creativity, always throwing new ideas out there. It was actually a really great pair to work with.

Did you work with them at the same time or did you split which tracks you would do with each one?

Yeah, we did most of the album with Joe, and then did a couple remaining songs with Jacknife after that.

Looking at your whole discography, how do you feel Crash Love fits in with that?

I think it certainly is an evolution. From album to album, sometimes you can see specifically how we evolve in some ways. In other ways, you can see how the logic of process is different from one to the next. I think at this point, maybe more than anything, it’s like an evolution of the summation of our musical career. You can certainly see things that we’ve learned by recording seven prior albums on this one.

Switching gears a little – did you help play bass again on the new Tegan & Sara record?

Not the one that comes out in October. I co-wrote some of the songs with Tegan, but I wasn’t able to go into the studio with them.

How did the co-writing thing go?

It was great. Tegan and I have been writing songs for years together. They’ve just been piling up. When they went to sort out the songs they were going to record for their album, Tegan brought up some of the ones that we did and I guess everybody else really liked them.

Obviously, AFI started out in the punk and hardcore scene. Do you think the definition of punk has changed over the years?

Definitely. It’s weird. When I think of punk, I think of Black Flag, or even like the Exploited or something. There’s certainly bands that are playing today that sound like Black Flag or sound like the Exploited, with a similar thing going on. But then there are also these other bands that people call punk, and I have no idea how because it doesn’t fit with my image of punk. I think everybody’s got their own idea of what genre definitions are. Emo’s another one that doesn’t make sense to me. But if it helps people to find other music that they like or whatever, I guess it’s cool. It’s weird to me.

So this is your third major label record. Have you adjusted to that whole different style now?

Yeah. There’s a few main differences that I’ve noticed since we’ve signed to a major. One is they have multiple resources to draw upon to make the record. We’re able to work with great producers in some of the really great studios, and we hadn’t been able to do that before. So, that’s great. I think that’s something that has really helped us shape our sound.

Then also the second thing is they actually are able to distribute records. We’d always had a problem before because we never could get records actually into the stores. The whole base of the music industry is changing, and obviously getting the physical records into stores is not as important as it used to be, but I still think the resources of actually getting the release to the people is all still very important. I think it’s definitely helped us as a band and to create some of the best music we’ve ever done.

With these last two records you’ve been able to accomplish quite a lot. Is there anything left that’d you still like to do?

It’s funny, I’ve thought about that. One thing that we haven’t done that I’d really like to do is there’s a lot of countries we haven’t been to that I would like to play. We’ve never been to Russia, and we’ve never been to South America at all, so that would be really cool. Other than that, just making a really great record is something that I’m really proud of, and that in itself is an accomplishment. Personally, I think finding new places to play is what I’d like to accomplish most.