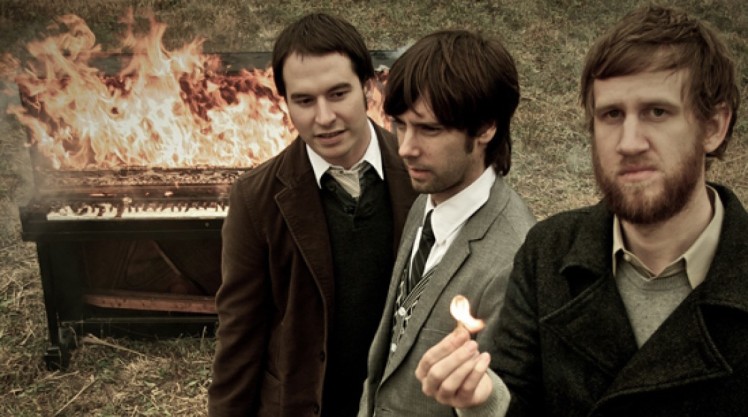 In today’s struggling economy and downward spiraling music industry, success is not what it once was, no longer determined by how many albums an artist sells.

“Success is redefined for us now,” Mae frontman Dave Elkins believes. “For us, success is raising $35,000 in three and a half months independently. It’s going on tour with no label. If you sell out a room, that’s success. If you don’t sell out a room, the success comes in learning what we didn’t do correctly and how we can make sure that people will be coming to that city to see us play next time.”

Just a few years ago, Mae was on Capitol Records. Following two well-received releases on independent label Tooth & Nail, the band was poised to break out in a big way. Unfortunately, things didn’t go as planned.

Mae’s major label debut, Singularity, garnered a split reaction, with the band losing two members and splitting with Capitol along the way. Elkins and the two remaining musicians, guitarist Zach Gehring and drummer Jacob Marshall, found themselves at a crossroads, unsure of what to do next.

“We just didn’t really know why we would continue,” admits Elkins. “We really needed a spark. We needed something that was going to grow into something bigger for us to understand our purpose, both individually as men and collectively as a band.”

The band found that purpose with a revolutionary new idea it has dubbed “12 songs. 12 months. 1 goal. Make a difference.” During 2009, the band will be releasing one digital download every month through its website, WhatIsMae.com.

All profits from the purchases will then be forwarded to humanitarian and charitable causes the band is sponsoring. Currently over $35,000 has been raised for Habitat For Humanity, which is building a house for a single mother and her three kids in Newport News, Va., close to where the group resides.

Mae will also be releasing a series of three EPs, entitled (M)orning, (A)fteroon and (E)vening, an acronym that coincidentally spells out the band’s name. The discs, which feature additional content that supplements the digital downloads, will be available for purchase at the band’s shows throughout the year, with (M)orning currently available.

Now completely self-supporting and running its own label, Cell Records, the band has encountered a new set of challenges.

“Sometimes it’s a no-brainer. It’s like write good music, put it out there and play for people who like what you’re doing,” Elkins says. “But we also know that if it doesn’t get done, it only didn’t get done because we didn’t make it happen. We don’t have any blame to throw anywhere except for us and our resources, which is a learning experience.”

These days, though, Elkins finds little reason to complain.

“To have a record label at the age of 27, to have produced this EP and these other EPs that are coming out, and to have raised $35,000 in about three and a half months – these are all dreams come true and some things I couldn’t even dream up when I was younger and dreaming about what this music life could be.”

For Elkins and the rest of Mae, (M)orning has become a rebirth in more ways than one.

“It’s felt like this is the first time I’ve been in Mae, in some respects,” he confesses. “That’s the most amazing feeling to be doing this for basically almost seven years now and feeling like a lot of things are happening for the first time. The mission that we’re on now is exactly what we needed to get us to where we are today.”