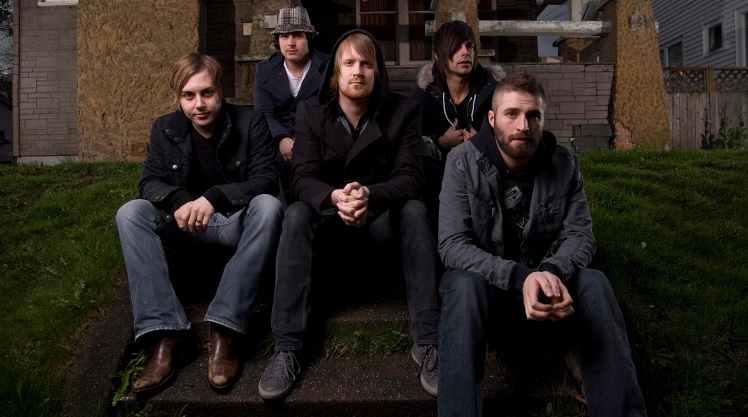 Lead singer Matt MacDonald deconstructs the spiritual metaphors on the band’s second full-length The Silver Cord, aiming for a more layered experience this time out, why he gets inspired to write about addiction, and what his writing process looks like.

Your new record came out several months ago but you’re just now being able to tour off of it. Was that wait hard to go through?

Yeah, we’re really antsy to play the new ones. We played the old ones for four years, some a little over five years, so we’re very excited to play new stuff. It gave us time to practice it and make sure that we can perform it. If it was up to us, we’d be out on tour immediately after the record’s released for a year.

Our schedule got changed, so we had to pick and choose. This one came along, this Atticus Tour, and it’s been a real blessing. We’ve been able to play an hour’s worth of music and perform in a way, time, manner and fashion that we’d like the record to come off. So, it’s been a cool experience.

What’s the meaning behind the term The Silver Cord?

Well, The Silver Cord is a literary metaphor dating back to ancient literature as early as the Old Testament and the Torah. It describes a silver, tinsel-like cord that connects your body to your spirit, and once that cord is severed you pass on and die. We just thought it was a pretty incredible metaphor for how fragile life is, and how this tiny little cord keeps us from death.

It’s actually pretty well known in mystic circles. People who have out of body, post-death experiences, who are pronounced dead but come back to life, almost all of them have this same sort of experience where they’re hovering above their body, looking at their dead body on the table, ground or wherever they are. They notice a silver, tinsel-like cord connecting their hovering, spiritual body to their mortal, flesh, dead body, and that cord draws them back in. It’s kind of a cool little deal because it makes the hairs stand up on the back of your neck and makes you think.

The record flows out of that concept of mortality, purpose, meaning, death and the inevitability of death. All the songs come out of that struggle with the purpose of why we’re here and why we’re put together so carefully.

What’s the significance of the artwork?

The guy who did our art, Jordan Butcher, was inspired by the concept that I sent over, so he drew up his own thing. When it came to designing the cover, we let him go for it because he seemed inspired. We’ve learned that whenever somebody’s inspired to do something, you let them do what they feel like they need to do. We were really impressed with what he came up with. It’s simple and clean and complex at the same time.

The metaphors in the cover are blood and water, and how one drop of blood can permeate water. There’s a lot of spiritual metaphors that go along with that. Then there’s the golden bowl, which is another metaphor for life. It’s hovering and it’s got a flame, so it’s very alive. Once that bowl is broken, and you open up the artwork and the CD, you see the bowl broken on the ground, which represents death. It went along with The Silver Cord theme, it was just using a different metaphor.

The record opens with a song called “The End” and closes with one called “The Beginning.” What led you to structure it in that way?

A lot of people say with every ending there’s a new beginning. With every death, there’s new birth. The circle of life thing. When you think about when a person dies and their spirit lives on, it’s like a new life almost. I think we wanted to start the record with an ending and end it with a beginning to emulate that circle of life type aspect of this whole theme of The Silver Cord.

What song from the record means the most to you?

I like “The Beginning,” which is the last song on the record. It’s got a lot of imagery from the road, and stuff like that. I also really like the song “God and Drugs.” It’s about addiction, which has always been a fascinating topic for me to write about. I think addiction is an incredible thing. I think these people are on the verge of greatness, but a lot of people who are addicted to chemicals are so desperate to fill the void in their lives that they turn to those substances.

My granddad was an alcoholic, and a genius. I think a lot of people who are super intelligent try to fill the void or numb the thoughts with substances. I just think the whole topic’s fascinating, and I always like to write about it in songs. Even dating back to when I was 15 and I first heard Pedro the Lion’s Whole EP. There’s a song on there about heroin addiction. It just blew my mind, and I was only 15. Ever since then, I’ve been inspired by it.

Your first record, Albatross, seemed to be more punk-influenced, while this one seems to be more straight-up rock. Do you agree that there’s a big stylistic leap between the two?

I think the new record has more listenability, if that’s even a word. You can listen to it more and more and pick out new things, new layers and new meanings. That’s what we wanted. We wanted people to be able to come back to it multiple times and find something new each time.

In between those two, you released an acoustic EP. Did that have any influence on the direction you went with The Silver Cord?

I think it definitely allowed us to think outside the box. That we are able to do things that people would look at us as a band in our scene and genre and say, “No, you’ve got to sound like this.” I think the EP really opened us up and said, “Hey, we can do this too. We like this music and that music.” I think it allowed us to be more daring on the new record just because it gave us a little bit of confidence that we could take a different direction musically.

I thought you turned in an excellent vocal performance, too. What was that process like for you?

It was great. The producer’s a wonderful guy. He sets up vocals really cool. He dims the lights and we light candles. It’s just me in a room by myself, talking to him over headphones. He really knows how to get the best out of me. Some songs we would do the whole song in one take, and then he would comp it later. Sometimes we would do different sections. I don’t know. It was a really cool experience. I was really able to get into it and not think about or get distracted by anything else.

Where did you record at?

A studio in Virginia on the coast called Studio Barbarossa. It was our producer Elvis Baskette’s grandma’s house on the beach that he turned into a studio.

So you guys are from Seattle and Tooth & Nail is also based in Seattle. How did you get signed by them? Did they already know about you from the local scene or anything like that?

I think a few people had been telling Chad about us, our A&R. He came out and saw us a few times, and that’s how the relationship started. It helps that we’re from Seattle, so they didn’t have to fly anywhere. We were able to develop the bonds at home, and that’s kind of the best way to do it.

We love it. I wouldn’t live anywhere else. We’ve been all over the country and every time we’re out for at least a month or two, we always start missing home really bad. When we get back here, the air is so fresh and clean. It’s more natural.

How did you originally get started in music?

Ever since I was a little kid, I would sing. I got my first electric guitar when I was 16. I played acoustic up until then. We formed some bands. Music’s always been a big part of my life. As I got older, I cut all the other things I was interested in out, so then it just became my life. That’s where I am now.

Obviously, the grunge scene was pretty huge in the early ‘90s in Seattle. Did that have any effect on you?

I did listen to Nirvana when I was a kid and Stone Temple Pilots, Pearl Jam and all that. That was on the radio. I was really too young to appreciate it. I was like 12 years old when Kurt died. That kind of popped my cherry musically, but it kind of faded as I became a teenager. The late ‘90s bands are what probably more affected me musically when I was writing music.

Care to give any examples?

Like Third Eye Blind and Blink-182. That’s what I listened to in high school. It was all stuff like that.

As far as the band’s songwriting goes, are you usually the one that comes up with the original idea?

If I knew how all the songs came together, if I knew the exact formula, I’d be rich right now. Truth is, songs come from multiple different ways. Inspiration will come when it wants to. Sometimes it’s a line in my head, or it’s a melody that I’ll sing into my phone, or it’s a guitar riff that I’ll play, or it’s something one of the other guys in the band writes. They come together and write something, and I’ll come in and write vocals to it. There’s a number of ways to write a song, and I think this band is open to whatever way it expresses itself.

Are you constantly always writing or do you have a set period where you do most of that?

I think that writing comes and goes as it pleases. Sometimes I’ll sit down and be really prolific and write five songs in a row. Sometimes I’ll go a whole month without writing a song. It’s not really something I can control. Usually when it’s crunch time, we can work stuff up, but most of the time it’ll be random.

Do you have any plans to do more acoustic stuff?

I hope so. I have some songs that I’m working on right now that I think will be great. I hope we can do something a little bit different. Maybe another EP, or something like that.

So, there’s only a couple weeks left in the year. Do you have any favorite records from 2008?

Probably Death Cab, Coldplay and The Silver Cord by the Classic Crime [laughs]. I’m really bad at top 10s. A lot of stuff I’m a year late on, so I shamelessly give ourselves a plug every time someone asks us.

I would encourage everybody to support the music they like and to come out to shows whenever they can. It’s a fun time, relatively cheap, and really helps out the bands that you like. That’s about it.