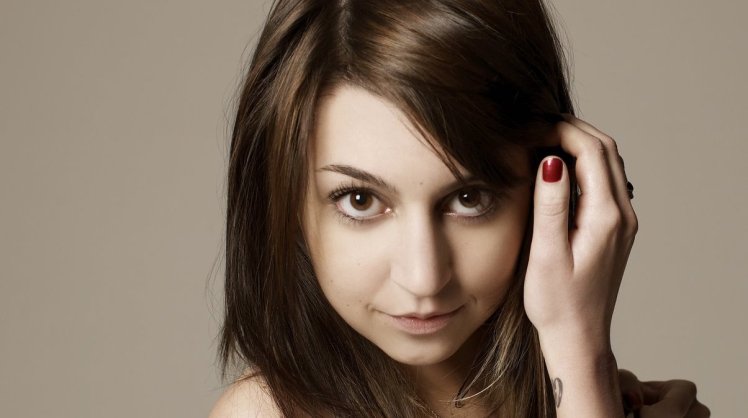 Jessica Poland talks about her debut album as Charlotte Sometimes, Waves & the Both of Us, her unique musical background, and what the recent female music boom actually means.

So you excited to be playing Bamboozle?

You’re on tour with We the Kings right now. How’s that been going?

It’s going really well. It’s been quite the grueling tour. We have like no days off, so it’s been kind of crazy. We haven’t really all got to hang out because of the really long drives. But the fans have been really cool and all the shows have been well received.

Are you excited to go out on Warped Tour this year?

Yeah, definitely. I’m not looking forward to the 16-hour waiting-in-a-parking-lot bit, but I’m definitely excited to play for everyone.

Since you are a pretty new band, how’s life been like out on the road?

It’s OK [laughs]. It’s interesting being the only girl on every tour I go on. It’s definitely a little smelly.

Are you a pretty clean person?

Yeah. I’m definitely like the girly girl. I grew up with boys. I have three older brothers, but I’m like, “Where can I put in my straightener?” I’m like, “What the fuck is this bullshit about?” So with that kind of stuff, I get kind of down when I can’t sleep and whatnot, but it’s been fine. Everyone’s really nice to me for the most part.

With We the Kings and Warped Tour you seem to be touring with a lot of pop-punk bands, which isn’t really your sound. What has that been like?

Strange. I mean, it’s cool because for some reason the kids that are into those bands like us, but it’s definitely a little weird for me because I come from folk and pop roots and jazz. It’s weird to go hang out with a bunch of punk boys and play for a crowd that you’re not so sure is going to dig you. Sometimes they do, and sometimes it can backfire.

Charlotte Sometimes was a children’s book from the ‘60s and was also a song by the Cure. Is that where you got your name from?

Yeah, and it’s my middle name. Charlotte’s my middle name. Basically, the Cure song is about the book. The book is about this girl who gets trapped in time and has to be someone else while trying to get back to herself. I think that as a young female, and just in general, I’m always struggling with the person I am, the person that I want to be, and the way that people perceive me. So, I kind of think that Charlotte Sometimes gives into all those personalities.

Do you ever still go by your real name or is it pretty much just Charlotte Sometimes these days?

You have your new CD coming out next month. How does it feel to finally get that out?

I’m so relieved because it’s been so long. The record’s been done so long that I’m like, “C’mon, I’m ready to make my second album [laughs]. So, I’m really excited. Once it’s out, I’ll just feel better. It doesn’t have to do anything, it’s just that it’s out. It’s done. No one can touch it anymore. It’s out, because an album is never finished until you stop working on it.

It’s called Waves & the Both of Us. Does that refer to anything specific?

Your first single is “How I Could Just Kill a Man.” I hear you get asked a lot about Cypress Hill and stuff. What exactly is the song about?

You released a three-song EP a little while ago. What’s the rest of the record like compared to that?

It’s pretty similar. I mean, those songs are on the record. It’s kind of just like a sampler to tide people over. I think people are going to be intrigued that the record’s not just about breaking up with someone or hating on a dude. It’s a lot to do with the changes of being a young person – leaving the house for the first time, having a job for the first time, going to college. You know, just being independent.

So it’s about the pressures that you put on yourself. It’s not as pop, in your face. Some of the songs are more laid back, like “Pilot” or “Army Men.” I don’t think people would necessarily expect that because when we play shows like this we can’t really play those songs.

Do you have a favorite song off the record?

Yeah, it’d probably be “Army Men” or “Losing Sleep,” which both kind of deal with the same, like, oh fuck. I’m in this crazy world and everyone expects things from me. Now I can’t sleep at night and I’m a crazy person.

What’s your songwriting process like? Do you pretty much write on your own or do you get help from the band?

Yeah, I write everything on my own. I’m not really good with working with other people around me because I can’t get what I really feel out. I feel like I’m being judged, you know? It’s like, oh no. Someone’s saying don’t write that lyric. Once it’s done, it’s easy. Basically, I just sit at home with my guitar and my piano and keep playing. If I had a bad day, then I’ll write about my bad day. If I had a good day, I write about a good day. So it’s not really that complicated. Sometimes it takes me five minutes. Sometimes it takes a few hours.

The last few years it seems that female songwriters and musicians have really started to boom. Last year it was like Paramore and Feist, while this year it’s been Sara Bareilles. Why do you think that is happening?

I think that people have stopped looking at female music as a genre and started looking at it as music, as it should be. It’s so funny when people come and they ask me, “What do you think about the whole female musician boom?” No one ever asks a dude, “What do you think about the male musician boom?” It’s like, dude. He’s just a dude who’s playing music, just like a girl is just playing music.

It also seemed that several years ago most of the emphasis was on appearance, which tended to overshadow the music, whereas these days it’s not as big a deal.

It’s definitely more about the music. I think now that the music industry is changing, you’re able to find music on your own. People are kind of like, “A good song’s a good song.” If they like the music, they’re going to go after it. If they don’t, then they won’t. It will show itself.

Is there anyone out there that you particularly look to for inspiration?

I have a lot of old influences, like Roy Orbison and the Everly Brothers. I think Lisa Loeb’s rad and anything she does I think is cool. I love her style and her music. She just seems like a really put together person all around.

I understand you originally started out doing ballet and dance type stuff. How did you end up doing this?

Yeah, I know. Right now I’m playing a punk show recital and I used to be a ballerina. You know, I was dancing for 13 years competitively. It was just a little too much for me, too much pressure to be really skinny. I just thought it was more fun to create my own art instead of having someone else teach me what I should be doing. So I kind of just stopped and went into music.

What was the first instrument you started playing when that happened?

It wasn’t really like someone inspired me to do it, it was more like, I have to do this in order to survive. I was writing a lot of poetry. I knew no one wanted to hear me sing poetry, so I picked up a guitar and started writing music. I’m a fan of songs, not so much a fan of bands or anyone specific. I just like songwriting. So I wouldn’t say one specific person inspired me to do it. It was more of like music in general.

How did you end up getting signed to Geffen?

I’ve been working with my management company since I was 16, Crush Management. Basically, they put up the money to record my album, and then once that was finished we shopped it around to different labels. They were all fighting over it. It was a little crazy for me and overwhelming. I just really liked Geffen. I thought they had their shit together, so I picked them.

Are you going to be shooting a music video soon?

Actually, yeah. This week, the 7th.

Are you excited about that?

Yeah, I’m a little nervous. It’s just like our only other day off [laughs], so it’s going to be a long day, but I’m super stoked. We shot a low budget video before but this is going to be the real thing. So I’m like, oh my God!

Do you have any other plans outside of Warped Tour for the rest of the year?

I think we’re going to go to Europe and tour there. We’re just going to do what we can with the album. If people like it, that’d be great. If they don’t, what are you gonna do? [Laughs]