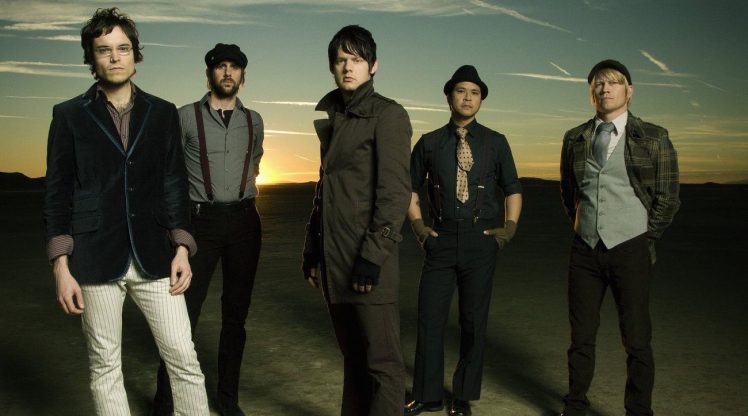 These days it seems like everybody is on the prowl for the next “hit” band, scouring the Internet in a quest for the musical Holy Grail. Consider that band found.

Meet the Myriad. Having recently been crowned MTV2’s “Breakout Band of the Year,” the Myriad, which played two shows last month in Orange County, is primed for a breakthrough. With a sound akin to European bands like Radiohead and Muse, the group has already toured with As Tall As Lions, David Crowder Band, Lovedrug, mewithoutYou, Mute Math and Switchfoot, while its sophomore effort “With Arrows, With Poise” is poised to hit stores May 13.

The band, made up of vocalist/guitarist Jeremy Edwardson, bassist John Roger Schofield, guitarist/keyboardist Steven Tracy, guitarist Jonathan Young and drummer Randy Miller, formed five years ago in Seattle. After playing an unsigned showcase at Illinois’ Cornerstone Festival, it attracted the attention of Tim Taber, founder of Floodgate Records, and two months later had its first record deal. The group’s debut album “You Can’t Trust a Ladder” – produced by Copeland’s Aaron Marsh – was later released in summer 2005.

When it was time for the follow-up, the band found itself in between labels, unsure where things were heading. As a reflection of the members’ states of mind, it settled upon the album title “With Arrows, With Poise” before any of the songs were ever written.

“Archery seemed like the perfect theme for what we were going through,” Edwardson confessed. “We read up on archery, and it’s like the great archers would have to shoot between heartbeats and between breaths. It seemed like what we needed to do in order to write this album was just to gain poise in the midst of a chaotic time, and focus and put all of our energy into these songs.”

The band spent the next year working on the record and eventually found a new home with Koch Records, an independent label known more for its rap artists, like Snoop Dogg, than for rock. The signing presented the group several unexpected opportunities, including the chance to finish the album in Berlin and master it at the famous Abbey Road Studios in London. However, the biggest surprise was still to come.

“We got a call from a friend last summer, and they said we should put a photo and a song up on this Web site called the Fuse Circuit Breakout,” Edwardson said. “Then we got this call from MTV, and they said they had chosen us out of over 4,000 bands to be involved in this sort of search for the next breakout band. It was a total shock to us because we really didn’t know it was a contest. We just thought it was another online profile.”

After being named one of the 12 nominees, the contest was turned over to fans, who voted the Myriad into the final three. The quintet was then flown out to perform a special concert in Times Square, where they were announced as the winners.

“It was totally crazy and out of the blue,” Edwardson summed up, adding that as a result of the win, MTV will promote the band across their networks throughout the year. This will include the debut of the music video for the first single “A Clean Shot,” which the band was scheduled to shoot last week.

Edwardson, who was excited by its daring concept, described it as a “very quirky video that seemed like a total risk but a risk worth taking.” It will be directed by Josh Forbes, who is coming off the sparkling video for Sara Bareilles’ smash hit “Love Song.”

If the “risk” indeed pays off, it will be another indication of how difficult it has become to define the Myriad. A quick glance at the band’s lyrical content offers further support.

“We’re not so super cut and dry. We like to tell stories through our music,” Edwardson noted. “You try to impact and move people’s hearts to God and to hope and to love, and hit home with them on things like disappointment and searching and longing.”

Nevertheless, the band doesn’t limit itself in its audience and would like to transcend to any listener.

“I always think of Christian bands as sort of writing music for Christians, whether it be like motivational Christian themes or worship music,” Edwardson explained. “We don’t really do that. We write music for everybody. We’ve always been sort of a club band but we love God, and going out with guys like David Crowder are just amazing opportunities that we’re always up for taking. Our whole thing is writing music for the world, and hopefully it’ll connect with people wherever they’re at.”

With the new album’s release approaching, the band will soon hit the road full time, providing main support for Eisley’s two-month spring tour. With things progressing at their current rate, it looks as if the Myriad’s hard work has finally paid off.

“This record is something we’ve been dreaming about for the last couple years,” Edwardson admitted. “We’ve been sitting on this record for so long. We’re just really excited to finally be getting it out to everybody.”